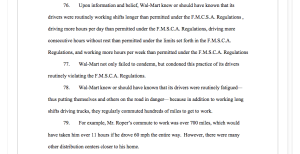 Retailer Wal-mart is being sued by actor and comedian Tracy Morgan for negligence after the actor was seriously injured in an auto accident on June 7th, after a Wal-Mart truck struck the vehicle the actor and several others were passengers in.

In the civil complaint, lawyers for Mr. Morgan allege that Wal-Mart was negligent for, among other things, not factoring in their driver's commute times to and from work in assiging routes for Wal-Mart drivers, with the result being sleep deprived drivers, and Wal-Mart possibly in violation of laws regulating how long commercial truckers may be behind the wheel. 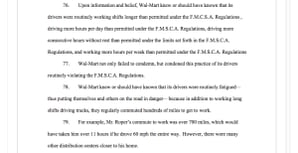 The driver, Kevin Roper, began his shift after a 700-mile commute from his home to a Wal-Mart facility.

The lawsuit, filed July 10 in U.S. District Court in Trenton, New Jersey. The case raises interesting issues of negligence on the part of companies that employ drivers and whether or not a driver's commute to or from their home to work to begin a driving shift contributes in whole or in part to the negligence of a driver.

Additional Insured endorsements are insurance provisions extending liability protection from the policyholder to other parties who may benefit.
Read Now

Loss payee is a common insurance policy designation naming the party to which payments are to be made in the event of a loss.
Read Now

Learn from the pros about risk-mitigation, document tracking, and more, with expert articles from Business Credentialing Services.