The Difference Between Per Project & Per Location 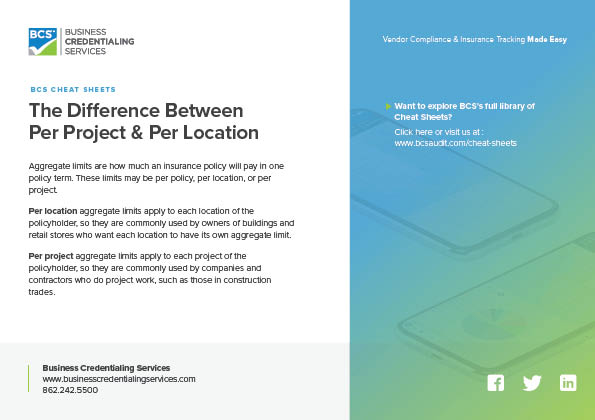 The Difference Between Per Project & Per Location

The general aggregate limit is the total amount that the policy has to pay in any one policy term and it can respond in 3 ways: per policy, per project or per location.

In this video we are going to explain the difference between per project and per location.

If the general aggregate limit is on a “per location” basis, that means it will apply to each location of the policyholder.

This typically is used by owners of buildings and retail stores since they have many different locations and they want aggregate limits for each location.

As for the “per project” basis, the general aggregate limit will apply to each project that the policyholder works on. This is usually used by contractors and companies that do project related work since they work on many different projects. For example, a painting contractor may do hundreds of painting jobs during the course of the policy term and is required to have dedicated limits for each project.

Bill is a painter who is working on three projects for a property management company. Unfortunately, Bill is not very organized he leaves his tools and paint supplies on the job site.  In two separate incidents at project one, one incident at project 2, and one incident project 3, third parties have suffered bodily injury based on Bill’s negligence.  Each injured party is awarded $1 million (far fetched but bear with us for the sake of the example); this is a total of $4 million in claims.  How does his CGL policy respond?