What Does Primary & Noncontributory Mean in Insurance? 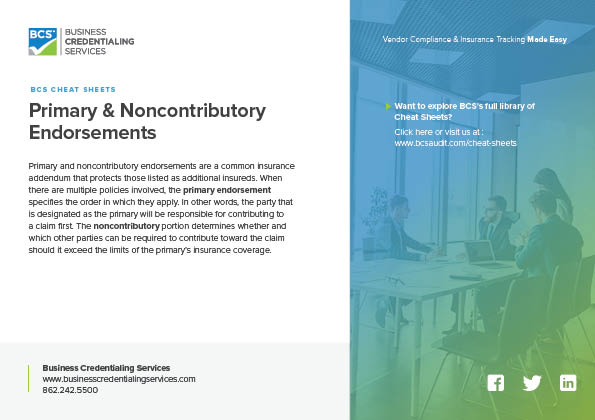 In a Hurry? Here's the Cheat Sheet
This summary briefly explains primary and noncontributory endorsements in just a few quick points! What Does Primary & Noncontributory Mean in Insurance?

What in the world does PRIMARY NON-CONTRIBUTORY MEAN

Let’s jump right into this one:

The importance of this term is its common use in contract insurance requirements, that stipulate the order in which multiple policies triggered by the same loss are to respond. When we refer to a policy being triggered, we are referring to the policy’s ability to provide a defense and pay for a judgement.

If that lost you don’t worry, we are going to break this down for you.

Let’s look at both parts of this to explain it better. The “PRIMARY” part shows that this policy will be triggered FIRST in the event of a claim. This dictates the order of whose policy will have to pay the claim. Bear with us for a minute and we will explain this in a real-life scenario later in this video.

The NONCONTRIBUTORY part means that the policy will not seek contribution from any other policy in order to cover the claim. So, this policy is responsible for paying the claim to the extent of its insurance coverage. Only IF its limits are exhausted could the rest of the claim then be tendered to another party involved

The construction contract will include agreed upon insurance requirements, which requires the GC and all sub-contractors to name the owner as an additional insured on a primary and non-contributory basis.

During construction, the subcontractor causes injury to a passerby while using a crane.

The contract usually requires that the GC’s insurance responds on a primary and non-contributory basis, for the Owner who is an Additional Insured, thus creating another layer of protection for the Owner.

We hope that example was helpful in understanding the importance of Primary Non-Contributory endorsements.

Remember, primary and non-contributory endorsements can apply to different policies and they dictate the order of which parties and policies have to respond to claims first and without financial support from other involved parties insurance.

Thanks for watching, please check out our other videos!! Ciao (: