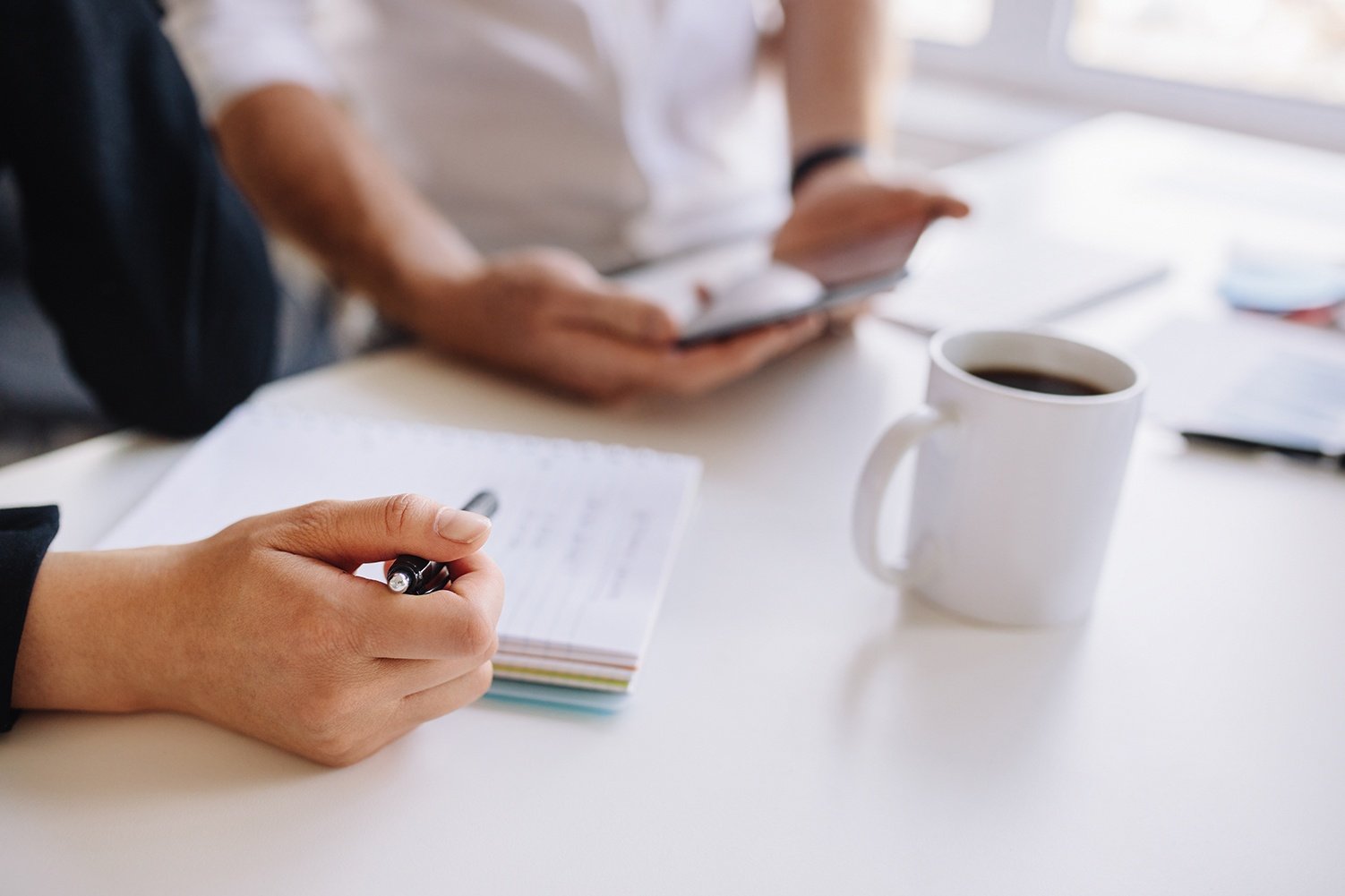 Operators of real estate businesses, general contracting firms, landscaping companies, and other organizations often purchase commercial general liability (CGL) insurance to cover themselves in the event of an unforeseen incident.

However, not all coverage is created equal—meaning there are distinctions you need to be aware of.

With that in mind, there are the two types of liability coverage—occurrence and claims-made—and each come with its own set of advantages and disadvantages.

Occurrence Policy: An occurrence policy protects a business from any covered incident that happens during the policy period—regardless of when a claim is reported. This type of policy will cover a business even if the claim is filed after the policy is canceled, as long as the incident occurred within the time frame enforced by the initial policy.

Example: Bob the business owner purchased an occurrence policy in 2015 but switched to a new form of coverage in 2020. Bob got sued in 2022 for an incident that occurred in 2017. In this instance, Bob is still covered by his original occurrence policy, because it was active at the time of the incident.

Claims-Made Policy: A claims-made policy provides coverage for claims that occur—and are reported—within the specific time period set forth by the policy. This means that if a policy is canceled or a premium isn't paid, any claim that comes through will not be covered—even if the incident occurred during the period when the policy was active.

Example: Bob the businessman purchased a claims-made policy in 2015 and continued coverage through 2017, then cancels. He does not purchase any extension (tail coverage) on the policy’s original limits. In 2018, Bob is sued for an incident that occurred in 2016. Since the claims-made policy is no longer in effect and he did not purchase tail coverage, Bob is the liable party—meaning he is obligated to pay for damages, as his former insurance carrier does not cover it.

Tail Coverage: Also known as an extended reporting period (ERP), this coverage is an additive option that becomes available only after a policy has been terminated. In effect, a “tail” endorsement extends the limits of claims-made coverage indefinitely. For a claims-made policy to cover claims made after the expiration date, a tail can be purchased to protect the policyholder from past incidents, despite a claim being made post-policy cancellation.

Example: Bob the businessman purchased a claims-made policy in 2015 and continued coverage through 2017, then cancels. He then purchases tail coverage. In 2018, Bob is sued for an incident that occurred in 2016. Since he was continuously covered at the time of the incident and purchased extended coverage, his old insurance carrier is still liable to pay for the suit, even though the original policy is no longer in effect.

Whether you have occurrence or claims-made coverage, the nuanced process of ensuring your vendors maintain active policies and compliant certificates of insurance (COIs) just got simpler.

After hiring vetted tenants via automated requests for proposal (RFPs), you can seamlessly onboard tenants or encourage self-onboarding through the vendor mobile app. All within a streamlined platform, easily message tenants and store pertinent documentation in-app while the software automatically flags COI and policy deficiencies for an immediate return to compliance.

Rather than waste valuable time and money with manual policy and COI tracking, invest in the solution that does it all, so you don’t have to.

BCS is the preeminent COI management solution on the market. Offering self-service and full-service tracking, this streamlined solution boasts integrated communication tools, automated RFP broadcasting, self-onboarding through the BCS App, and so much more. To learn more, schedule a demo or contact us today.

What is Commercial General Liability? 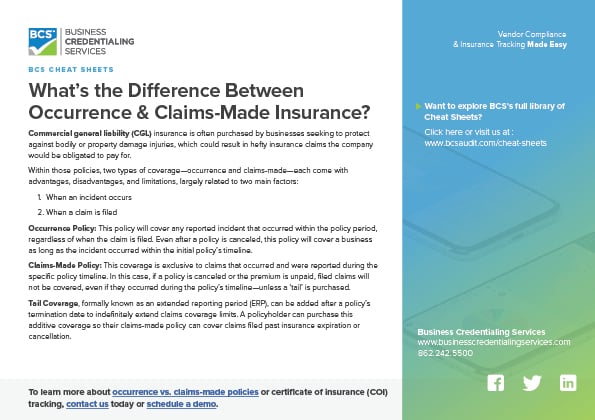 In a Hurry? Here's the Cheat Sheet

This summary of our article defines the key differences between occurrence and claims-made insurance policies. 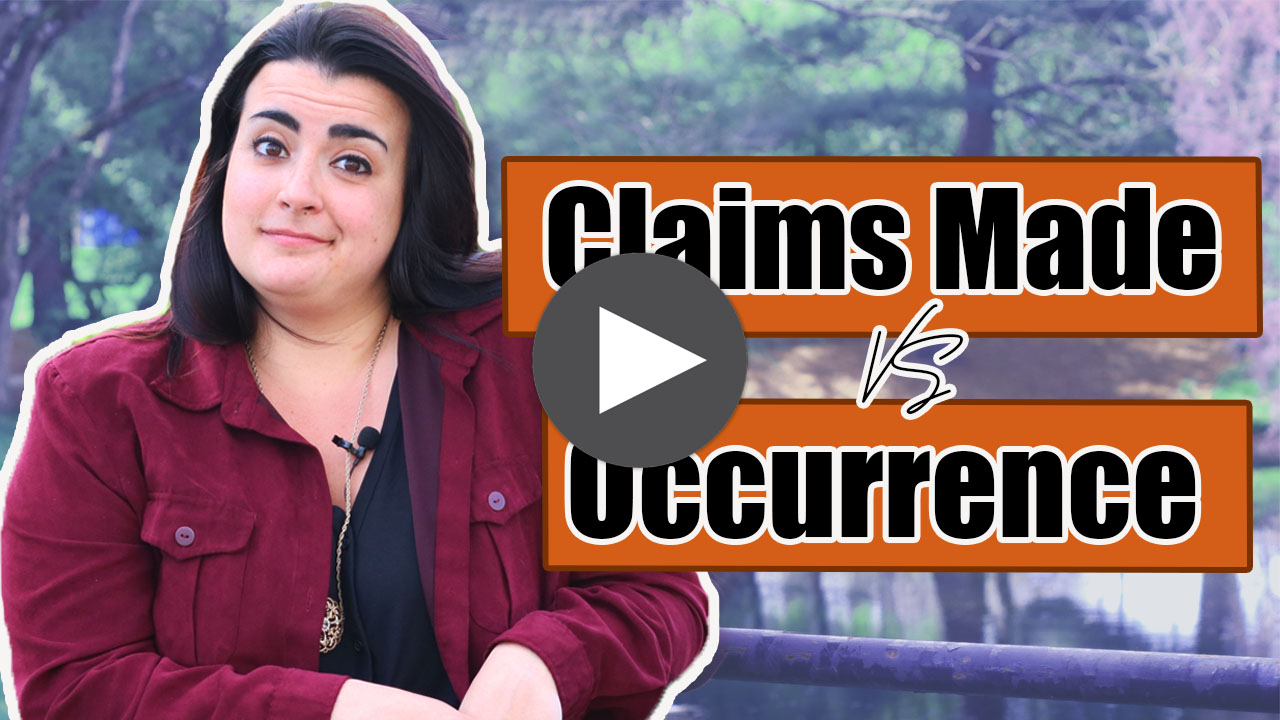